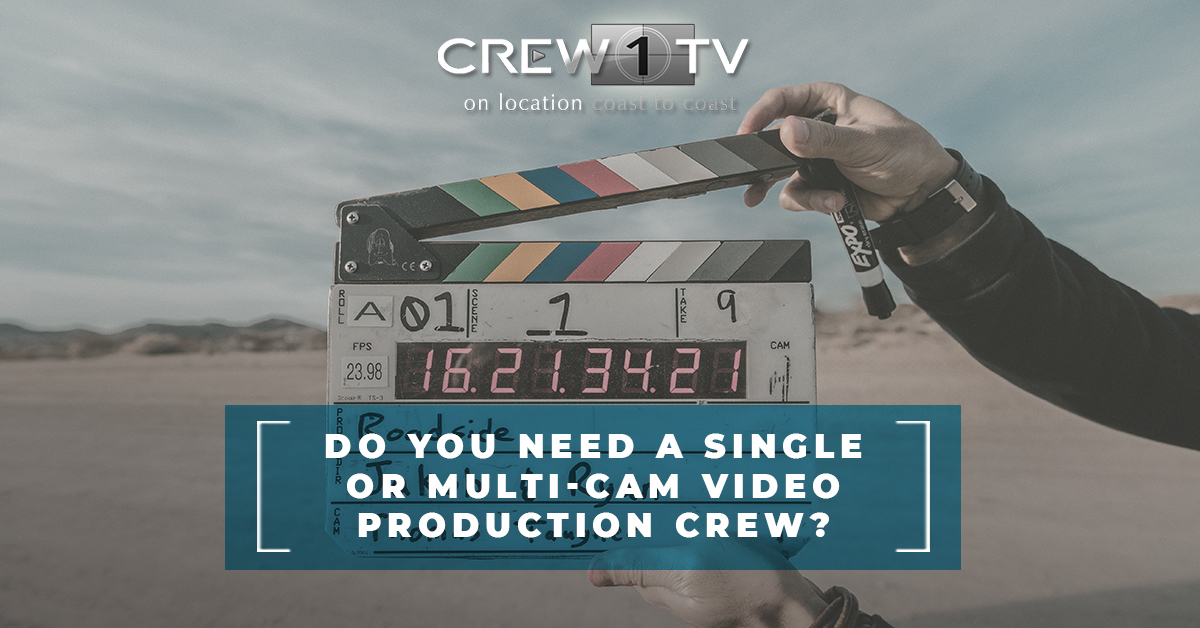 Do You Need A Single- Or Multi-Cam Video Production Crew?

Before our camera crew in NY goes anywhere, we always make sure we know what the video entails and what might be required to shoot it. We’ll ask lots of questions and always arrive over-prepared rather than under-prepared, ensuring we have the people and the equipment necessary for the task at hand.

During this discovery period, it will become evident what kind of camera setup you need, namely whether you need single-camera or multi-camera setup. If you’re not familiar with these terms, keep reading to find out how they differ.

Single-cam and multi-cam are the two basic options when choosing how to shoot a video or event. Their names are fairly self-evident, though you’ll find out later why the use of less equipment can actually lead to a more expensive video.

What Are Some Examples?

During the 1980s and 1990s, multi-cam sitcoms ruled the airwaves. If you think of shows like Friends or Cheers, you’ll notice that the primary locations are all long, shallow rooms. There are typically four cameras following the action, and the set is lit so that no matter where someone is they’ll always look good. This type of production was a cheaper way of shooting than to have a single camera and multiple takes of every scene that focused on every actor. It also meant that a studio audience could be incorporated.

The current trend in sitcoms has been to move away from multi-cam and shoot single-cam instead. Shows like 30 Rock and The Office really made good use of this format and elevated it in the 21st century. Still, it’s not a new idea: many sitcoms from the 1960s were single-camera, including The Andy Griffith Show and The Addams Family. The primary difference was that the modern single-cam shows did away with the laugh track.

How It Works With Videos We Shoot

How do we choose whether to use single- or multi-cam? It all depends on the needs of the client. Some corporate videos we shoot are simply one person speaking to a camera. But multi-cam can also be used to shoot that person from another angle, because cutting to a different angle is one way to keep the audience’s attention.

Another reason to shoot single-cam is if a video has to be of the highest quality and makes use of multiple setups, which is the way that movies are shot. Single-cam is also used to give a production the feeling of a “man on the streets” feel.

When shooting live events, multi-cam is almost always the best way to go. You never know what’s going to happen at a live event, so it’s good to have as many cameras on the action as possible. Take a rock concert, for example. You want the wide shot, a camera following the lead singer, one on the drummer, on the on the bassist, one on lead guitar, and probably one to show the audience reactions. Not only can this be live switched and shown as a webcast, but it can also be edited later to look even better.

Again, that’s a tricky question to give a hard answer to.

With single-cam, imagine a person following a teleprompter and talking directly to the camera. There’s really not much editing to do there other than maybe color-tweaking it and adding a slug to let everyone know who it is. But single-camera work can also require the most editing, because it’s being put together like a typical Hollywood movie. If the audio was recorded separately from the video, that’s going to add a lot of time to the editing as well.

Multi-cam tends to fall right in the middle. If the right amount of preparation is done ahead of time, editing multi-cam can go fairly smoothly as an editor switches among the cameras in order to focus on who’s talking and to get reaction shots.

Which Is More Expensive?

We’re not being coy when we say it depends. Single-camera might be the cheapest way to capture your video, or it might be the most expensive. Why? Well, if you have a person sitting in a chair and talking directly to the camera with the help of a teleprompter, then the crew will be smaller and the amount of time needed will most likely be very little.

On the other hand, if you have a narrative piece — such as if you’re shooting a scripted video as part of an anti-harassment campaign for your company — the single-camera approach will be more expensive. There will be multiple takes of each scene from a variety of angles, which means that the amount of time necessary to do all of the different set-ups will be considerable. Remember, moving the location of the only camera also means moving all of the lights and sound equipment, and it can also mean dressing the set differently.

Now let’s discuss multi-camera production. Multi-cam production of an interview will cost more, due to the larger crew necessary, but they can be cheaper (as we found out from the sitcom example above) due fewer set-ups.

Which Do You Need?

Honestly, we don’t know yet! There are dozens of factors that will determine which type of video production in NYC is best for you. The best way to find out is to talk to experts with decades of experience. Contact Crew 1 TV today with questions or to get the process started!