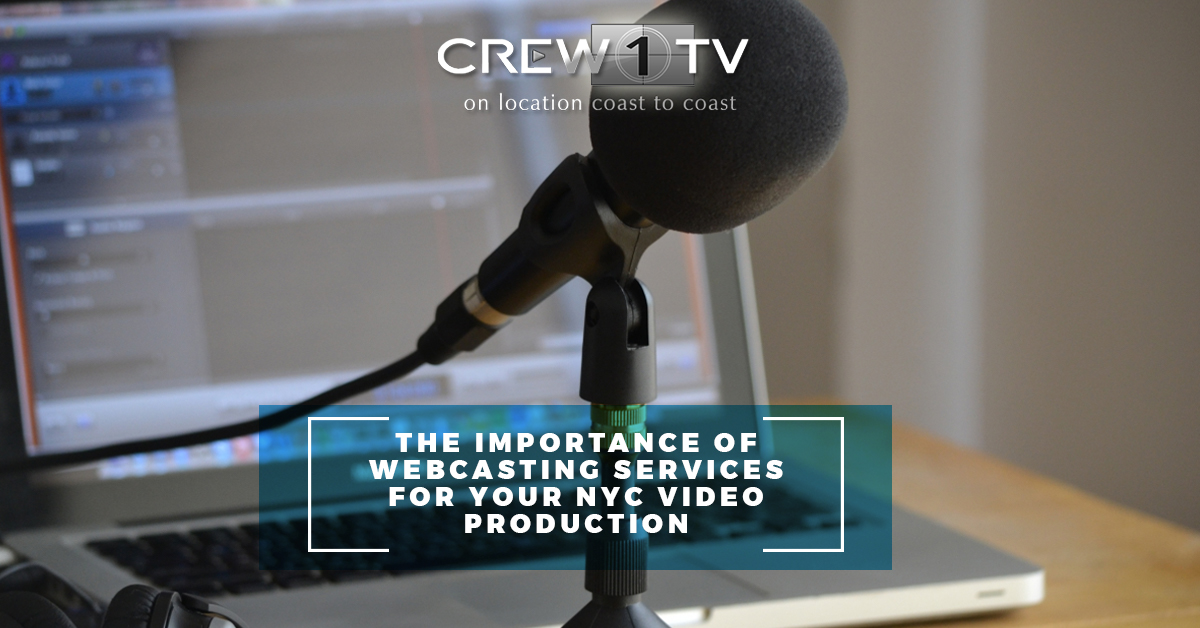 Being in the NYC video production business for decades, you can be certain we’ve seen some huge changes over the years. When we started, everything was standard definition and VHS delivery. That became HD, DVDs and tiny web videos, then moved on to Blurays and 4k video streaming.

There are so many ways to deliver media to our clients as final product, but one of the most common is as a webcast. People are coming to us more and more looking for webcasting services, and we’re more than happy to send our web video crew anywhere they need us. Let’s learn a bit more about webcasting and how our webcasting company can deliver what you need.

What Is A Webcast?

A webcast is essentially broadcasting on the internet. It often starts as a live event that is streamed directly to the consumer with minimal editing and as quickly as possible. A webcast can be as simple as someone speaking directly to camera, or it can include a huge production with video switching and graphic overlays. Webcasting services can be delivered free or behind a paywall. One huge advantage to webcasting is that it’s available to anyone and doesn’t require a network or cable provider to distribute content.

We’ll Shoot Your Webcast and Deliver It Live

When it comes to standard broadcast, there’s a good reason why live sports are still one of the most reliable generators of revenue: people want to watch them live. Viewers want to be a part of a large event and see it in real time, to feel that they’re part of something big even if there’s no one else physically near them. There’s just something that humans like about saying “I was there when X happened.” In the case of many events, people want to see what’s happening in real time in order to avoid having it spoiled by website or new station later in the day. They might also be interested in immediately being a part of the Twitter stream when an event is live.

Of course, not every event is incredibly exciting. Sometimes a company will want to deliver a CEO’s quarterly speech to employees at multiple locations, and they want this information to get to every employee at the same time. We can make such events as large or as small as necessary, bringing the right number of cameras and lights to fulfill your needs. We can even provide the makeup to make sure the company leader looks as good as possible under the lights.

We can make sure the webcasting goes off without a hitch. No matter why people might want to view your webcast, you should hire the best web video crew so that it’s of the highest quality.

We’ll Record It For Repeat Showings

Few webcasting events are shown once and then never again. While that might seem like an excellent way to get everyone to watch it that one and only time, live webcasts are often released in some other way later. The reason? The client knows that someone will find a way to record the event, and since it will be out there as a bootleg, they might as well put the actual event out there as an official release. In the event of a company-wide message, companies want to keep the message around so that it can be viewed by employees who were out of the office that day.

We’ll Create the Extras For Later

Webcasting isn’t just about live delivery. It can also be about what happens before, during, and after the concert. In short, the final product we deliver can be considerably more complex than what went out during the live webcasting services.

Take a concert webcast, for example. People are excited to watch it live; like we said above, people have that fear of missing out and want to be part of something live. But what if you could get people back to watch it again? Much like a Bluray will put extras on the disc to get someone to buy a movie they already saw in the theater, you can draw people back to you event with extras. This might include a pre-show interview with the band, their arrival to the arena, backstage footage, and a look at the afterparty. We can even put together a better edit than was possible during the live edit, perhaps capturing a musician’s facials expression or interaction with a bandmate that couldn’t have been foreseeable during live switching.

Get The Best Webcasting Service Available

At Crew 1 TV, we’re a webcasting company with the tools and experience to make your event, no matter how large or small, as professional as it can possibly be. If it has to be webcast a single time or will be up for anyone to see at any time, we can make it happen. Contact us today to learn more about the webcasting services we can offer you. We look forward to working with you.