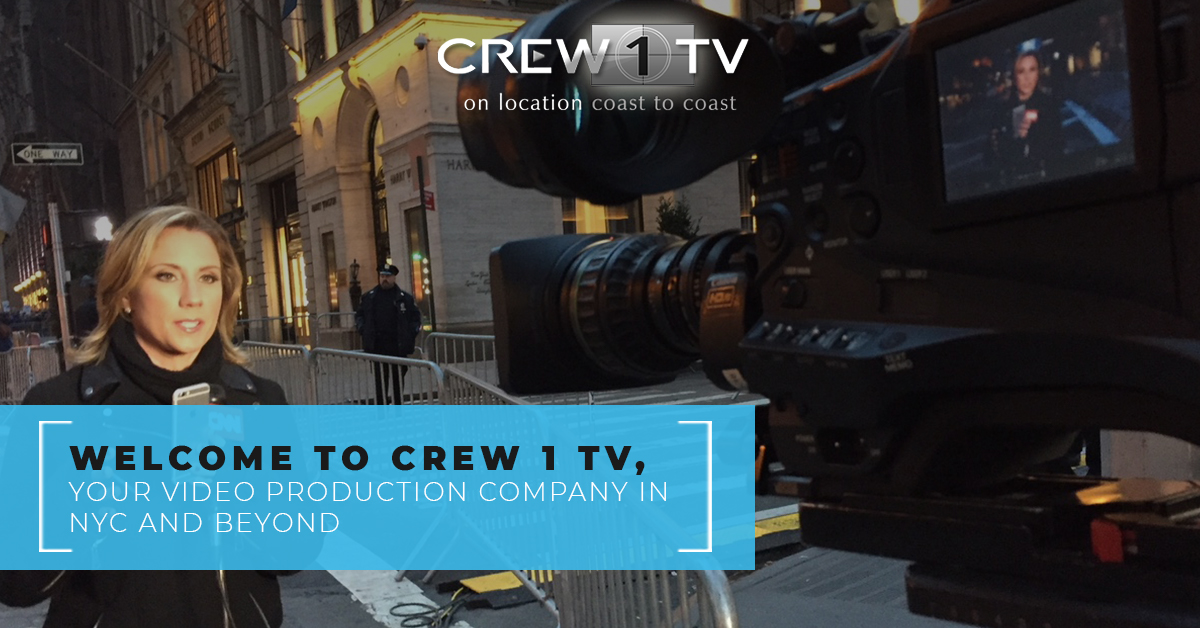 We’d like to thank you for stopping by Crew 1 TV for your video production needs. For nearly twenty years we have been providing video services from coast to coast and around the world for events, interviews, webcasting, and more. Our video production crews have the latest equipment so that you get the absolute best footage, whether you’re doing a single-camera interview or need a huge corporate video production. Let’s take a look at our services and what our camera crews can do for you.

The term corporate video covers a lot of territory, and that’s because video production can play so many roles when a business wants to present itself to the world in the most professional way possible. We’ve worked with some big names to provide them with top-tier video production, including Marvel Entertainment, Microsoft, Avon, InStyle Magazine, Johnson & Johnson, Macy’s, Major League Baseball, Sony Music, and so many more. Here are some of the most common reasons they hire our production company.

Events are a big deal in person, but a venue can only hold so many people. Also, a company with offices all over the country (or all over the world) isn’t going to fly every employee in just so that they can experience it in person. That’s why corporations hire camera crews to record the event and then get it out to everyone else, whether it’s public on the internet or it lives on a company’s intranet.

Whether it’s a quarterly update by the CEO, a speech by a world-famous motivational speaker, or an announcement of a huge new movie, the right production company can make the event just as exciting as if a person were actually there. And with the amount of zoom we have on our cameras, we can make it even better in some ways, offering multi-camera views and close-ups that the typical viewer in the audience could never get.

When most people think about corporate video production, they often think of someone in HR talking directly to the camera with a teleprompter, videos that have to be watched by every new hire. We’re more than happy to provide camera crews, the teleprompter, and complete the editing on these important videos. We can also help make them as interesting as possible so that we keep the attention of those who must watch them.

Sometimes a corporation needs professional video production to record scripted content. In the case of HR, skits can be created to address scenarios that employees might find themselves in. Scripted videos a corporation might need include everything from sexual harassment training to warehouse safety. We can provide a camera crew and post-production services to create videos that will keep the viewers engaged.

Sure, we have the word TV in our name, but our commercial video production has evolved to embrace webcasting services. No medium has changed so much, so quickly as video on the web, and we’re always ahead of the curves so that we’re ready to address the latest changes. Whether you’re looking to offer your event live-streamed or require further editing to have it released at a later date, we can provide the crew to make it happen (as well as uplink and production vehicles if necessary).

When it comes to producing webcasting services, there are many aspects that are considerably different from traditional commercial video production. We know that not everything is going to end up on people’s big TVs, and that’s why it’s important to consider all of the devices on which people might be viewing the video in question. This includes desktops, laptops, tablets, and, of course, phones. Knowing how to shoot the video and the best post-production standards to use can engage viewers with the video. This includes using the right compression setting to make it look as good as possible while limiting the amount of bandwidth used so that people don’t become frustrated.

As your professional webcasting company, we’ve embraced the web and are ready to make your video look as good as it possibly can. Check out some of our videos here!

While events and big commercial video production can be exciting, there’s no doubt that we get a thrill working with celebrities and other people in the public consciousness. We’re proud to have worked with these people because we know the standards that they expect when they get in front of a camera. Take Patrick Stewart, for instance, who is a star in X-men movies that have a $150,000,000 budget. He’s accustomed to the professionalism shown on huge movies, and we’re proud that the company that hired us to shoot his interview trust us to properly capture him. We provide the expected high quality for a lot less than $150 million!

In our time as a video agency, we’ve worked with some of the biggest names on the planet, including Bill Clinton, David Bowie, Elton John, Whoopi Goldberg, Christopher Walken, Dustin Hoffman, Jerry Seinfeld, Sting, Neil Diamond, Rudy Giuliani, Mariah Carey, and so many more. You can see a list of celebrities, executives, and politicians we’ve worked for (and with) right here.

Of course, with thousands of shoots under our belt, not everyone we interview is going to be known to the general public. Not every interview has to have a full crew, and multiple cameras. Crew 1 TV can provide smaller camera crews that meet a smaller budget. Click here to contact us and find out what we can do for you!

News and documentary can encompass a great variety of video styles. We might be on-location at a parade one day and sit-down single-camera interviews with someone in the music industry the next. Another day we might be in a helicopter getting aerial footage of a tropical island or a large city. From NYC to Los Angeles and everywhere in between, we have assisted news stations and documentarians in getting the footage — and the stories — that they need.

Big names from the entertainment industry trust in our film production company to get them the footage they’re looking for, including the BBC, ABC, Fox, The History Channel, VH1, A&E, The Travel Channel, PBS, FX, The Discovery Channel, CBS, and Disney.

What would commercial video production be without commercials! We can work with you to advertise your company in the most efficient way possible, no matter where the final product ends up. From 15-second commercials to extensive web-based corporate branding videos, we have the crew and the equipment to get it done.

Whether you’re advertising exclusively on the web, getting into commercials that play on streaming services, or are interested in doing local or national television advertising, our NYC-based production company can deliver a product that you’ll love.

Whether you know exactly what you’re looking for or need us to help you shape a general idea, Crew 1 TV is ready to help. We have an extensive array of directors, producers, camera crews, and post-production experts who are at the ready to capture an event, whether it includes thousands of people or just a single interviewee. We look forward to hearing from you, so contact us for video production in New York and beyond!