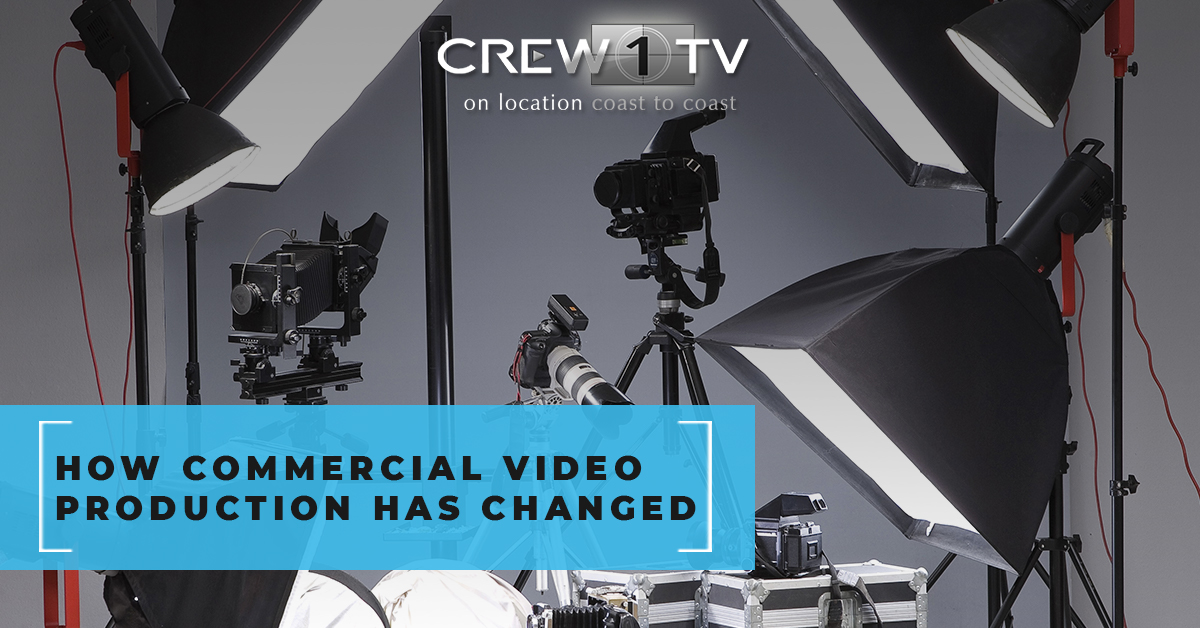 If you check out our About Us page, you’ll find out a lot more about our president, Dino Quaglietta. Next year Crew 1 TV will be celebrating our 20th anniversary, but Dino goes back way before that, having worked with all of the major networks and many of the minor ones. In that time there have been huge changes to the world of video production, more than anyone could have seen coming.

Television and corporate video production didn’t change much between TV’s invention in 1927 and the end of the 20th century, but then everything started to change at an incredible pace. Here are some of the changes we’ve been through as we constantly change to keep up with the ever-changing market of video production services.

Everyone Expects The Best

Some people have claimed that we’re in the golden age of television. One reason for this claim is simple: the best television shows look as good as the best movies. Television production has simply gotten exponentially better in the last two decades. Where artful techniques such as rack focusing were once only used in theatrical movies, today they’re commonplace in your nightly episode of CSI. Lighting is better, too, as is the equipment used on set (more on that below).

This increased quality in television, which was once considered second-tier video production, has also lead to an increased quality for other video production services. Customers who came looking for videography for corporate videos and events in the past didn’t mind it looking like a middle-of-the-road television show. But now that television looks amazing, they also want those videos to look amazing. While it certainly takes a lot of work, we can make it happen.

Digital has taken over. Digital images are such a part of our everyday lives that we often forget that having a digital camera just 15 years ago was a big deal.

At the turn of the century most commercial video productions, including new stations, were using standard definition Betacam cameras. If the shoot didn’t require quite that quality, mini-DV could be used. DV went high-def with HDV, and then as high-definition became more popular there were many competing tape and tapeless formats. The resolutions went to from 480i to 480p to 720p to 1080i to 1080p. Digital-to-digital ensured that there wasn’t any loss of video information, but backing up that video so that it didn’t get lost became a concern.

All this to say…a lot has changed! We’re now shooting 4k, and it’s all-digital all-the-time! Thanks to capturing everything digital, we no longer have to digitize analog tapes. Our process is much more streamlined, ensuring a faster turnaround for your video services.

Finally, let’s talk size. You’ll sometimes see small consumer cameras saying that they shoot 4k, and technically they do. But when shooting in difficult situations, the large lenses and sensor sizes of bigger cameras are going to be necessary. No matter your 4K video production needs, Crew 1 TV has the equipment to make it happen.

When a corporate video was shot 20 years ago, the most common setup was a) a camera and b) a tripod. The same was true with many events, where the setup might be a) three cameras and b) three tripods. It was simple, but it was the best that could be done at the time.

Today, the equipment to create high-end videos is more readily available. Sometimes it’s because we can use smaller cameras that don’t require long rails. Other times it’s because a jib that used to cost $10,000 now costs $2000, and we can have more than one going at a time. In 1980, three television stations and a few Hollywood studios were just about the only companies needing video equipment. With the digital revolution, hundreds of TV stations, and thousands of movies being made, economies of scale means better equipment for a more reasonable price.

Even something as seemingly simple as lights have taken leaps and bounds, as the video industry has benefited from the same change as your living room has — incandescent to fluorescent to LED. We have tracks, rails, lights, jibs, and Steadicam operators at the ready to meet the standards you, and your customers, expect in video production.

Turnaround time has gotten exponentially faster in the past few decades. Before digital-to-digital became the norm, tapes had to be digitized before they could be edited. Digitizing was 1:1, meaning that an hour-long tape would take an hour to digitize. Then there’s the editing. Non-linear editing systems were certainly an improvement over destructive editing systems, but they required bulky computers and took time to render even simple transitions.

In today’s world, the turnaround times of the past simply wouldn’t be tolerated. A project that once would have required six months might take two, or something that would have appeared on DVD in weeks can now be up on a company’s intranet in a matter of days. We understand the interest in getting what you want as quickly as possible, all while keeping the quality high. Interested in a quote for how much time and money it will take to complete your project? Click here to get the conversation started.

We can’t talk about how the world of video production service has changed without discussing the web. Twenty years ago we were all watching a choppy, pixelated, playing-card sized trailer for Star Wars: The Phantom Menace on dial-up. Today we can head to Netflix and stream a 4K movie with no interruptions.

Of course, not every video is going to land on a huge state-of-the-art television. People are watching them on every device imaginable, from desktops to laptops to tablets to phones. Videos have to be produced with the most-likely final destination in mind, yet still have to work across all of them well. This means knowing which graphics are going to be viewable when the video is watched. And if the final destination is a phone, it needs to be able to look good on the latest iPhone as well as one that’s five years old.

Then there are the codecs. There are literally hundreds of video codecs out there, which is code used to compress and present videos so that they use the least amount of data but still look as good as possible. You always want to make sure you’re working with a video agency in NYC that understands the latest codecs so that your video retains premium quality.

Ready To Work With Our NYC Video Production Company

We’re based in New York City, but we travel the world to create amazing videos for our clients. We’d love to work with you, so click here with any questions you may have. We look forward to working with you!