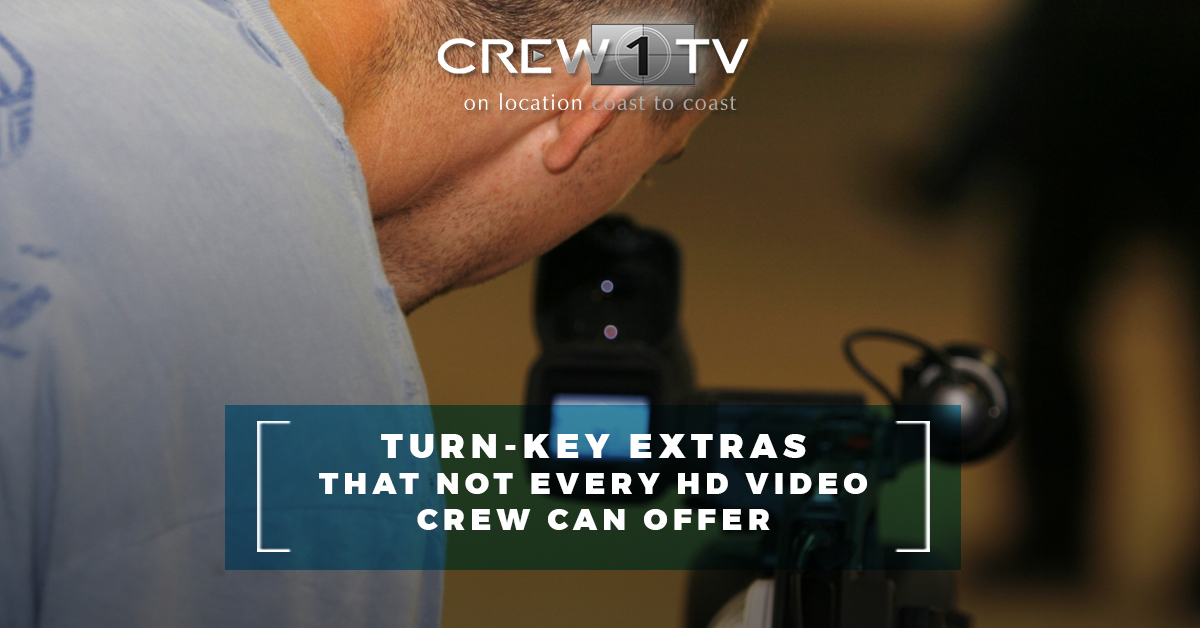 Need a film crew in New York City? We won’t lie to you and say we’re the only video production NYC has to offer; you wouldn’t believe us anyway!

We don’t mind the competition, of course. Competition makes everyone better and ensures that quality increases over the years. But just because you find a camera crew in NYC doesn’t mean that they’re going to be able to do everything you want them to. Sometimes it’s just a new company with a couple of expensive cameras and couple of lights, and they’re certainly not going to be able to provide you with everything that most of our customers need. Here are some of the extra “turn-key” production and video services that Crew 1 TV offers.

For decades, the level of makeup that was needed on a performer or interviewee was only determined by the venue. If someone was on stage, their makeup had to be heavy to counter the stage lights. Because 35mm film had a higher resolution than standard definition television, a different level of makeup would be necessary than if someone were on television.

Then something very interesting started happening about 10 years ago. As more people made the switch from standard definition (SD) to high definition (HD) televisions, everyone started noticing that the makeup on people on TV wasn’t looking quite right. (It seemed especially noticeable for newscasters.)

The fact is, makeup artists had to change. What looked perfectly good in SD just looked wrong in HD. We’re happy to let you know that we offer high-quality makeup services for everyone in front of the camera for a video shoot and our HD video crew knows how to light it properly to make a person look natural on today’s screens. Whether it’s going to be shown on a movie screen or watched on a phone, we can make a person look good.

Like we said before, there’s nothing wrong with competition. And we also don’t begrudge new people in the industry who have a passion for video production in NYC and beyond. But two guys, a couple of cameras, and a $300 light package from B&H isn’t going to provide everything that most shoots need. That’s because there’s always something else that’s needed. What is that something? You don’t know until you need it!

That’s where grip trucks come in. Every shooting location presents certain challenges, and you never know just how many lights, C-stands, or reflectors you’re going to need. With a grip truck we can always bring more than we need, because we don’t always know the shooting conditions we’ll be under. Instead of just having to make do or head back to the office to grab some extra equipment, we can have it out in the parking garage or right outside the stage door when a grip truck is on-site.

The Steadicam was first used in a Hollywood film back in 1976 as a way of getting steadier (and previously impossible) shots. One of the most recognizable vehicle chases in history — the speeder bike chase in Return of the Jedi — was shot using undercranked Steadicam shots through California’s redwoods. Decades later they became a staple of television dramas such as ER, allowing shows to shoot thanks to fewer setup and moving of equipment.

Today there are many Steadicams out there, both brand name and knock-off versions. Some cost $10,000 or more, but it’s not just the quality of the rig itself that’s important; it’s the operator. Just having someone show up with a Steadicam isn’t enough, because you need someone who knows what they’re doing with it. We have the right people and the right equipment to make your shoot go smoothly.

While jibs and dollies have been a part of film and video production for decades, they’re recently made their way to television and even webcasting services as the demand for the high quality increases. Crew 1 TV keeps our share of them to make our shoots exciting and retain the interest of the viewers. It’s important to have the right equipment necessary in order to get the shot you want, and our selection of dollies and jibs can make it happen.

At one time only the top news stations in the country could afford teleprompters. It didn’t take too long for local newscasters to become interested in them, because it meant less memorization and reduced the chance that something could go wrong with the paper in their hands.

Today just about anyone can afford a teleprompter, but, much like with Steadicams, it’s important to make sure you hire a camera crew who has someone who knows how to use it. There’s an art to working with the reader to make sure the words are moving at the right pace, and you don’t want to waste time with a crew that doesn’t know what they’re doing.

We’ve Got What You Need!

No matter whether you’re putting together a video for your small business or working with an A-list Hollywood celebrity, you don’t want to waste time working with a video crew in NYC that can’t provide you with the services you need. Crew 1 TV can give you everything above and more, so give us a call when you need a film crew in New York City!