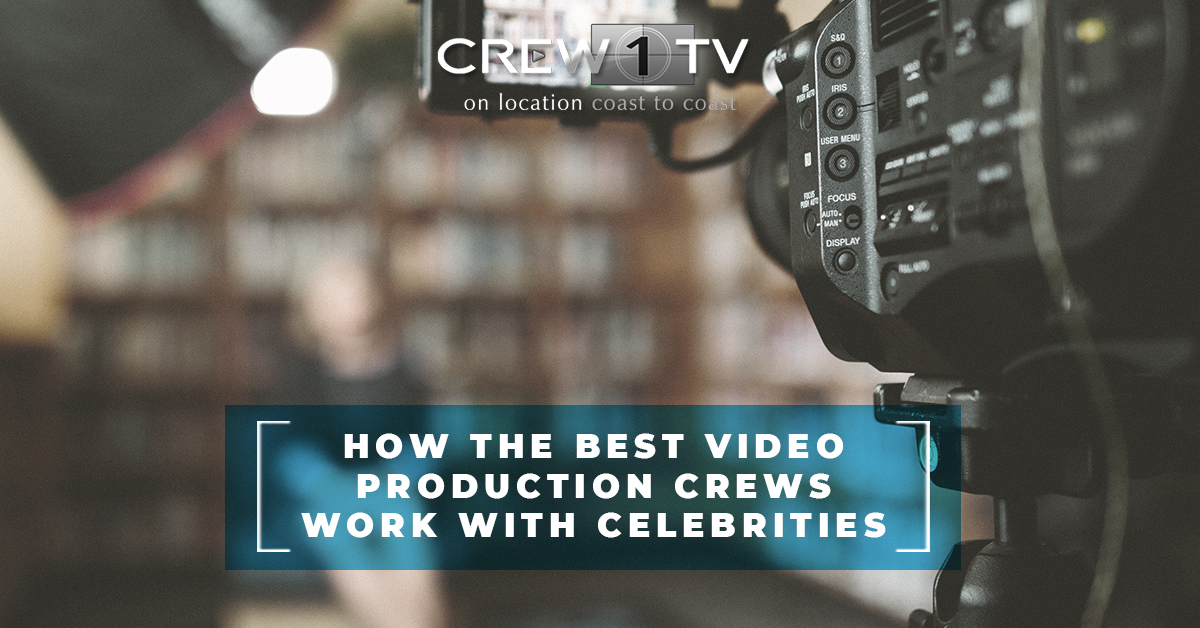 We can’t deny that it’s quite fun to be able to say that we’ve worked with our share of celebrities over the years. After all, we’ve worked with some very big names such as Jerry Seinfeld, Bill Clinton, Elton John, James Earl Jones, Mariah Carey, and Sting.

It’s one of the perks of the job to be able to say we’ve worked with world-famous people, but it’s not always easy. Some celebrities are easier to work with than others. That’s why it’s important for the entire camera crew to work together to make things come together in the most efficient way possible. That includes how we work with the celebrity themselves. Let’s take a look at what a video production has to do to get ready.

It’s important to know a bit about the celebrities a production company will be working with. Celebrities are people, and just being a celebrity doesn’t mean they’re going to be aloof and stuck up. Of course, there are those public figures that are harder to work with; a little research beforehand will go a long way in finding out how they react in the typical interview.

It’s vitally important to be able to read people. Even a celebrity who’s known for being friendly can be having a bad day. Maybe their TV show got canceled, or a concert venue just let them know that the stage can’t accommodate their band. Or maybe they were talked into the interview by a publicist and aren’t really interested in being there. Who knows, their kid might be sick and they’d rather be with them at home.

That’s why it’s so important to be able to read people in the moment. If we hit if off with them, then it’s great to joke around a bit. If they don’t seem to be in the mood, we’ll just be as technical as possible and get them out the door…because if they don’t want to be there, it’s important to wrap it up.

Like the Boy Scouts say, “be prepared.” This one doesn’t just apply to celebrities but any video production out there, whether it’s webcasting services or a corporate video production. You have to have the right type of video equipment on hand to get the job done, and that means you can’t leave a celebrity hanging because you forgot to charge the camera batteries the night before. It also means having backups of the equipment in case something goes wrong…because every piece of equipment eventually breaks down at the wrong time.
We’re Going to Make Them Look Good

Like we said, we’ve interviewed Jerry Seinfeld. Big name for sure. And as much as we’d like to say “Jerry Seinfeld researched all of the video production companies in NYC and personally picked us,” he didn’t. He has someone he trusts pick us as the video agency, and by proxy Mr. Seinfeld trusts us.

Celebrities and public figures know that we’re there to make them look good. We’re going to light them properly, apply the right amount of makeup, and shoot them with the right lenses so that they look their best. They keep coming to us (or, as we said, their agents and coordinators keep coming to us) because they know our camera crew has the ability to present them in the best possible light (literally).

Put Them At Ease

Sometimes the people we work with might be well-known on screen, but they can have a hard time being themselves in front of a camera. Some of them need to be put at ease. That might mean being at ease ourselves, or finding some common ground with them to discuss. Having someone chat with them as the equipment is set up can make things go a lot smoother during the entire interview.

Of course, it’s also important to remind them that we’re only going to be choosing the parts of the interview that make them look good (see above). There’s really nothing to be nervous about, because we can shoot their answers to the questions as many times as necessary. In other words, “no one is going to see the mistakes except for the editor.” That one simple statement can go a long way to convincing someone to relax.

No matter if we’re interviewing a big celebrity or shooting an interview with the CEO of a small company, we’re always going to show the person in front of the camera the utmost respect. If you need a film crew to make someone look their best, contact Crew 1 TV today!